I was going to continue reading “In America”, but then I started to think about politics. This probably is again partially Rammstein-related. There are people who know absolutely nothing about them and then there are people who think they know something about them, and the latter usually seem to have the wrong, media-induced idea of them being a “bad”, even “right-wing” band. Which naturally, as anyone who really knows anything about Rammstein is aware, couldn’t be farther from the truth. It doesn’t even take reading hundred of articles – which yours truly confesses to have done – to figure that out.

Oh, and this by the by is Rammstein, so you know what I'm obsessing about. 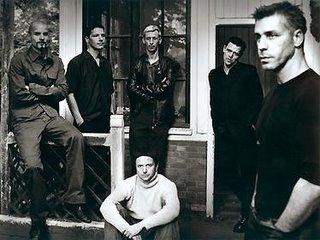 And this is where you can hear snippets of their songs. If you don't like metal-leaning rock in German, don't bother. If you do, press "Rosenrot"-PLAYER.

Rammstein isn’t really a political band, even if they have a few songs that could be considered as “statements”: Links about their general left-wing leanings, Amerika about the dangers of globalisation and Zerstören of course can be seen as their clearest anti-Iraq-war comment. Amerika is also partly that, and for me also Benzin, even though it apparently wasn’t really meant as an anti-war statement. That obviously appeals to me, since I’ve always seen Monsieur Bush as a very frightening school-yard bully, a new-born Christian radical, with no way near enough brains to lead a country, a power-hungry hawk with no real conception of ordinary people’s lives and the suffering his actions can cause. So I did not need Rammstein to make me anti-Bush or anti-Iraq-war – I was that much, much earlier. I did need Rammstein to admit to myself my own left-wing leanings. Having a fairly bourgeois immediate background it took me awhile. Rammstein – and certain people I’ve met through sharing a Rammsteinian addiction – have also taught me to love myself a lot more than I did earlier. And loving myself has given me strength to make decisions I’ve wanted to do for a long time.

In order to tell you why I think I’ll just post the ramblings I used to justify the decision to myself in May or June or whenever it was. As I said before, I think on paper. I was planning to write a book of Confessions then and this was to be the first chapter. Here you go...

These confessions you are about to hear, are not religious by nature. I do not wish to confess to God or his servants. I do not believe in God; and even if he (she/it?) should be out there somewhere, he (for purposes of convenience) would not wish to hear my confessions. He only listens to those who love and obey him. That is why I have decided to leave the church today; to hand in my resignation, to be rid of the bunch for once and for all; one man's (human, not male, you understand) silent protest. It feels excruciatingly phoney for me to be another name on the list of his followers when my heart is so full of mistrust. Mistrust and dislike for his church, which is a source for so much evil. And happiness too – I won't deny that many have found their salvation within the church. But the church – like its master – loves and accepts you only if you obey – conform – be a good girl and do exactly as they say. If you are different, they may tolerate you – graciously, righteously – but they will never accept you as you are. Toleration always proclaims deviant the thing that it tolerates.

And yet my heart is troubled by the decision. I hesitate to tick those boxes and click the send-button. The modern-day wonders. Separation from the church on-line. Will take you only two minutes and it is accomplished. Some would certainly call it a work of devil; I think I'd be happier to see it as a true means to practise one's freedom of thought.

And yet I am troubled. Why? Is it because on the back of my mind hover the hordes of frowning relatives. I doubt it, not anymore. I have decided that I must be me and not allow the expectations of other people to affect my life anymore. The days of being the puppet on the strings are over. She says confidently, hesitantly, with a stubborn grimace on her face and her back against the wall. No more...

I do not think it's the relatives. They will be disappointed, but they will understand. Is it that I fear the wrath of God then?

- But dear girl, didn't you just say you don't even believe in his existence?
- No, that's not precisely what I said; I said – or meant – that I find it highly irrational and unlikely that he would exist. I won't deny the possibility; I don't know everything after all.
- Oh really? ::cough, cough, you could have fooled me sometimes…::
- What?
- Nothing. So you think it's possible that he created Earth in seven days and plopped Adam on it and did some magic work with his ribs?
- Don't be ridiculous! Of course not. Earth developed and blaah-blaah... I'm not going to give you a lesson in the origin of species.
- But God was behind it and there is no life anywhere else in this universe?
- Oh, I don't know! I seriously doubt it.
- You doubt that God was behind the creation of Earth or that there is life somewhere else?
- That God was behind it. I mean, don't you think, that it would be highly unlikely that there wouldn't be life somewhere else too? It just doesn't sound rational. Not that I am saying it would necessarily be intelligent life; you are not going to make me a crazy space-enthusiast here!! Although I don't want to claim that it couldn't be intelligent life, too. It sounds a little smug to assume that we would be THE only intelligent life-form in the entire universe.
- A relativist rationalist with a problem tolerating the space-enthusiasts, huh?
- What?
- Nothing. So God didn't create Earth and chuck Adam and Eve to play happy couple on it. So what did he do? Smite the Egyptians and talk to the prophets?
- No, those are metaphors if anything.
- Flood the Earth and the, uh, Giants, and save Noah and his prolific family?
- Did you just hear what I said?
- Ok, so the New Testament then. Got Mary pregnant with a whisper in her mind? Virginal insemination, you'd like that, huh?
- Don't talk to me about virgin-births!!
- So, basically you are saying that even if there is a God, he isn't really responsible for anything?
- ....
- Well?
- I don't know. Maybe. But that doesn't mean that he wouldn't be influential. People have done so much in his name.
- Yes, people. So perhaps it isn't this abstract God you are afraid will smite you if you leave his congregation. It's the people who follow him.
- I don't know. Maybe.
- That seems to be your standard reply.
- Well, that because I DON’T KNOW! Can't you get that?
- Of course I get that. But religion isn't about knowing, it's about believing. You don't believe in God, not in your heart of hearts. You may have the last lingering remains of the atavistic fear of hellfire, but you don' really believe. And the church, his followers. Tell me this, even if there were a God, just for the sake of argument, do you think that belonging to the church would get you closer to him?
- No, no, definitely not. The church is an organisation of man, bureaucratic and power-hungry. It is there for its own sake, not for that of mankind – or God.
- We have issues there, don't we? Time for that later, maybe, but not now. So, if there were a God, still for the sake of argument, would he know your heart and your thoughts, even if you're not a member of one of his many churches?
- Well, yeah, if he were God, of course he would.
- So, what's the point in being part of the church, then? Not God, who possibly exists or more likely not, in your opinion. Making the relatives happy? Getting the church-wedding, which it seems like you are not ever going to get anyway?
- Shut up, you insensitive bastard!!
- I thought you didn't even want a church-wedding anymore?
- Well, I don't, but that's no reason to insinuate that I would never be able to find a spouse for myself.
- Hmm, issues there too, but I don’t think I want to get into those...
- Be quiet, I don't know what I want.
- I think we have established that. But the church, old girl! What's making your hesitant, if there is really no – let me just whisper it – rational reason for you to stay?
- There isn't, is there? It's just that it is a big decision and you know how I hate decisions. It's a real statement.
- You are a conservative coward, who'd rather cling to a burning tree than hop into a lake. It's a statement to belong to the church, too. It's not like we are living in the middle ages. You are not going to get burned as a witch, if you tear yourself from the skirts of the mother-church. You aren't even going to get chucked by your friends, since plenty – if not most – of them think exactly like you do. And even if they don't, it's the 21st century, girl! Religion belongs to the private sphere these days – unless you were unlucky enough to be born in the dominions of Allah, the Pope or the all-mighty Bush.
- Are you trying to talk me into leaving the church, then?
- I'm only asking if this is yet again one decision you are hesitant to make because of your unfounded fears. I don't want you to live your life controlled by fear.

Fear does control my life. A confession. An answer – of kinds anyway. I have filled the form now. It didn't take even two minutes. Your name, place of residence and social security-number. Now the decision is only that one click away. Why do I still hesitate, when I know that I want to do it? I need five more minutes to think about this. I think I'll just go to the bathroom and make my decision. Oh, the fundamental believers would crucify me for that. And why do I care, when they are so low on my list of people to tolerate? Five more minutes.

Now it is done. Clickety-click. I will be getting a letter in five to ten days that my notice has been registered. I feel so relieved that I wish to cry. I have gotten rid of one expectation more. If I ever wish to rejoin the church, it will be my decision now; not something that society and traditions expect from me.

And, dear Reader, I must say that these X months later I am still plenty happy with my decision.
Lähettänyt Mie klo 22:46