First week is over

Atelierfrankfurt had open days today, so I went to see some modern art. They had very diverse pieces of art there, from video installations to graphics, from photography to more conventional paintings. Some very nice things and some that didn't do anything for me. It's a place where young artists work, so they had also provided an opportunity to take a look at the artists' workrooms - or should one call them studios. If one had been minded to, one could have also talked to some of the artists. I didn't. 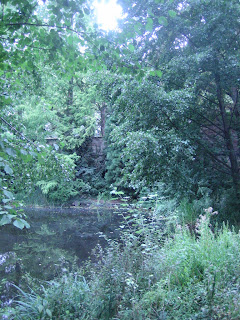 After that experience I did some walking around in Frankfurt. There is this Green belt - Der Grüngürtel - that goes around the center of the city. I walked around for over an hour and managed to cover most of the area. I came from the direction of the Hauptbahnhof where the Atelier was and ended at the Main river. It's a very beautiful walk and I wouldn't mind doing it again some day soon. 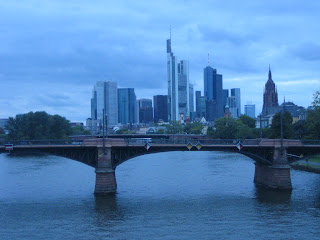 From the river one could see the downtown with the skyscrapers. According to Wikipedia Frankfurt is one of only four cities in the entire Europe that has a greater number of big skyscrapers. I found that a bit surprising, but I suppose it's true. And understandable. Those thingies don't really fit just everywhere. 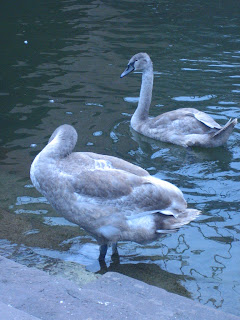 The river was beautiful. There were swans. There was a guy jogging, who looked really a lot like this actor who is in all the German detective series - usually playing the bad guy. Could have been him for all I know. There was this crazy American or British fellow who threw a ball into the river for his dog to catch. The dog jumped in in a heartbeat from a relatively high bank and really seemed to struggle against the current. The poor thing had to swim quite a way to get back to land. Looked awfully dangerous, I tell you. 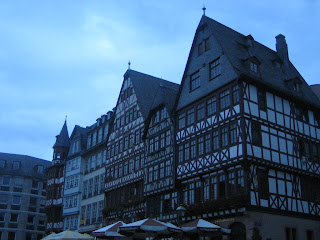 Eventually I got back to the city centre. I saw some of the famous landmarks and walked slowly towards my U-Bahn station. I didn't feel like going home just yet, so I went to get the movie program for the week. I sat for a while near Hauptwache - that's the station - and watched the people running past. There was this event today for raising money for AIDS-work. People were asked to run for five kilometers around the city and there were different sort of activities going on around the Alte Oper. I ran into them while I was on my Grüngürtel-tour and managed to catch a piece of the musical entertainment. It's a lively city this one, Frankfurt is.
Lähettänyt Mie klo 20:34