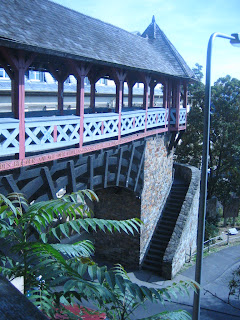 The traveling continues. Today I've been to Wiesbaden, which is a bit further than Mainz. That doesn't sound awfully tempting: Wiesbaden - at least to my mind that brought nothing but thoughts of industry and cars. Not that they have anything to do with Wiesbaden as such, but it just sounded like that kind of town: industry and cars. But no, Wiesbaden was quite beautiful and well worth of visit. 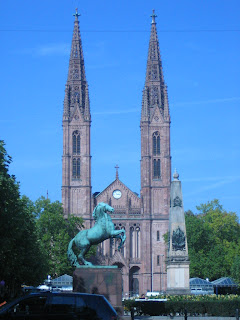 It was almost as old as Mainz and also boasted relics from the Roman times. That one above was supposed to be part of an old wall from the 4th century. The bridge though is a much later addition. There were also a number of churches in Wiesbaden. I sat in one for about half an hour listening to a weekly organ music concert. Not too bad, but I have to say that organ music still doesn't make it to number one on my list. Plus those church benches really enjoy their role as torture devices. 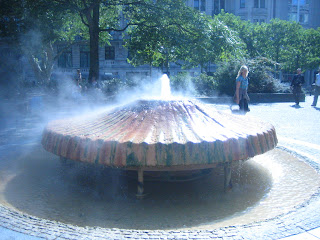 In Wiesbaden I also came across something that I've thus far only seen in Island. A hot spring. Not a geysir, but a hot spring, which in this case had been directed to bubble through this fine piece of art you see on the right. It may have been captured, but the water steamed and smelled of rotten eggs just like in Island. 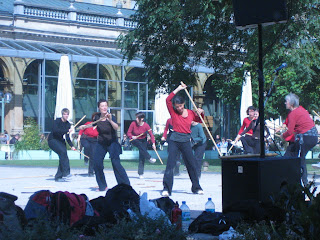 There was also a group doing a choreographed "stick-dance", which reminded me of Robin Hood. The part, you know, where Little John and Robin Hood meet and proceed to beat each other to pulp, because they have issues of honour and stubbornness. I'm sure this "old martial arts turned into sports" has a proper name too, other than a stick dance. It looked quite fun actually. 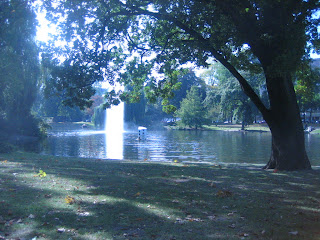 Wiesbaden also had some lovely parks. The weather in honour of the weekend was again above 20, so there was nothing to stop one from enjoying the said parks. This one was next to a nice looking theatre and quite close to the local casino, which was also in an old fancy building. Already Dostojevski for instance had apparently tried his luck there. Wiesbaden had predominantly a look of an 19th century town with lots of houses that were nearly in palace-class. Queen this and Emperor that had stayed in a number of them. And yes, that is a tiny house in the middle of the lake. 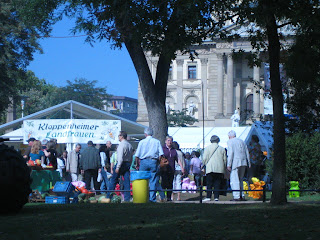 In the park (that's the theatre on the background by the way) there was some sort of an autumn fair going on. There were some farm animals for the children to look at, pumpkins and decorated hay bales on display and again people selling everything from fruits to sun flowers, tractors to local wines. I bought an example of German sausage - bratwurst - and proceeded to do comparisons with the Finnish kind by the lake. German sausages - at least of this type - are nearly white and look a little weird, but are quite nicely spiced and really very good. 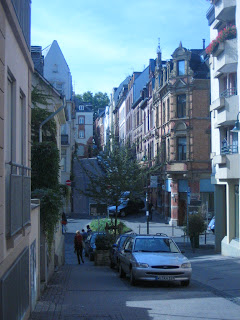 Yep, but that was Wiesbaden. Not a bad place at all. Worms, Wetzlar and Heidelberg are perhaps the next places on the list to go. They are a bit further away, but still within an easy distance. I also just booked a three day trip to Venice in November. Hehe. Frankfurt is just a teeny bit closer to places than Helsinki with the predictable results in prices, so one just has to go see things.
Lähettänyt Mie klo 20:44