We were in Stockholm last Saturday and there, in one store, they sold DVDs for cats – birds flying around for two hours straight. I didn’t buy it since it cost more than 20 euros, but now I am thinking maybe I should have. The cat is watching the nature document again, making weird noises and for the first time actually trying to touch the TV. It’s not the birds though that are getting her the most excited; it’s Orangutans (or possibly Gorillas, my expertise in these matters is somewhat limited). Jep, DVDs for cats belongs to the category of utter insanities of the decadent western world, but nevertheless I think that if I ever run into them again I’ll get one for the cat. She can have dreams of living in the wild.

The cat is a talkative one. She talks to me especially in the mornings. Luckily she doesn’t get up too early, but when she thinks that it is time to wake up, she lets me know. She also comes to say hi to me every time I come home from work – who said that only dogs do that.

She only likes certain types of food and refuses to eat if I offer her something that isn’t to her taste. She’s afraid of the vacuum cleaner, loud noises and fast movements. 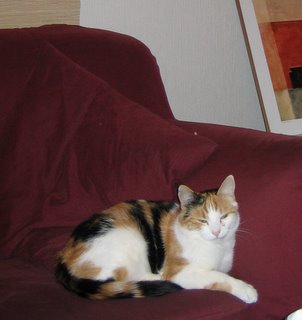 I took the cat from the Animal Shelter so she probably had an unhappy childhood and therefore likes to hide if something scares her. Perhaps that is also why the cat doesn’t like to be picked up. She likes to sleep next to me, or on top of me, but she won’t relax if you pick her up.

And that’s the cat for you. In July. She has grown fatter and fluffier now and is starting to look like a real cat.
Lähettänyt Mie klo 19:26