Greetings from Vaasa! The Guest house now has an internet connection, so one no longer needs to forgo the pleasures of surfing. 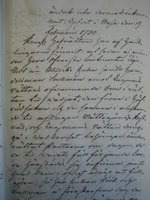 I have taken already nearly four thousand pictures. Like this one. You'd think it was a piece of cake, but after few hours I could really feel it in my back. The pic needs to be steady, taken from far enough to fit the entire text into the shot, but close enough to be able to read it properly, the light needs to be right so you need to lean in and peer through the camera but can't sit in order to avoid the shadow... In effect it kills your neck and shoulders.

The hazards of archive work.

I think I'll make some tea now and read the tabloid (a.k.a Ilta-Sanomat). Lordi is still the news of the day - and not just in Finland. Google news -search gives you 736 hits for Lordi. Some of those claim that we are a highly self-conscious nation. Like in that joke about the elephant - one version of which goes like this:

I'm sure everyone wonders at times what others think of them. But are we as obsessed with the idea as to be "highly self-conscious". And if so, why? Don't we already in this year 2006 have a good and clear enough image of who we are? Or do we still need the others as mirrors to form our national self-image?

Individuals need others as mirrors to form a healthy self-image and self-esteem, especially as children. But we are not a child anymore as a nation, are we? Or maybe the image that we had formed of ourselves in our infancy was no longer to our liking. Now we are trying to re-form it to something that appeals to us more and for that we need the others' opinions as mirrors. In order to believe in ourselves as a nation capable of success we need to see that image reflect from the eyes of the others.
Lähettänyt Mie klo 19:05

nice blog Iisa...
bellissimo!
...in order to improve my miserable English I've been looking for interesting blogs,and why not .. interesting humans...

If you have time and inclination please visit my blogs
http://johann22.wordpress.com
http://johann.splinder.com

I checked your blogs - unfortunately I don't speak Italian so I did miss quite a bit of them. I was happy to improve my miserable German though with your fascinating thoughts. Life is a strange thing.