By request, a few pictures from Iceland... 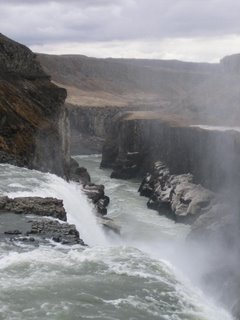 The Gullfoss falls. These used to belong to an Icelandic family of farmers some hundred odd years ago. At that time there were lots of foreign businessmen in the country trying to purchase different falls so they could turn them into hydropower plants. Some of these businessmen - British, methinks - came to the farmer Tomas and asked to buy Gullfoss from him. Tomas refused to sell: the falls had been in the family for as long as anybody could remember and he didn't think it was right to sell them. The businessmen then asked if he would rent the falls to them for a hundred years. Tomas considered, decided there would be no harm in that and rented the falls.

When he got home he took the time to read the contract thoroughly through - note, dear people, that this is something you should do before signing contracts or you can find yourself in a heap of trouble! Tomas noticed that in the contract there was a clause, which gave the businessmen the right to turn the falls into a powerplant and which effectively meant ruining the falls. This upset Tomas mightily, but since he was a man of his word, he didn't think there was anything he could do about the situation. His daughter Sigríður however was of a more stubborn kind and swore to save the falls. She put on her shoes, packed her bag and commenced her journey towards Reykjavik.

She walked through the difficult paths until she reached the capital and spent weeks looking for someone who could help her. Finally she found a young lawyer who listened to her. They went through the contract and the law books and found a rule, which stated that if the businessmen should be late in paying the rent, the contract would be null and void. The businessmen had already by this time fallen behind in their payments and so Sigríður managed to get the falls back to her family. And so, happily everafter, they remained free for the future generations to take pretty pictures of. 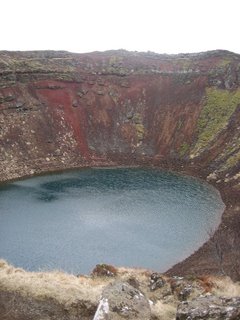 The crater with a lake. Not too far live some of the "hidden people". The short version of the story here is that God went to visit Adam and Eve one day. Eve had been busy and had had the time to wash and tidy up only some of their children. She didn't want God to see the dirty ones, so she told them to go on and hide. Then God comes along, visits the family, admires the children and asks Eve if these are all their children. Eve is still embarrassed and tells God that yes, these are all of them. But God is not to be fooled and he then utters that what is hidden from his eyes, shall be hidden from the eyes of humans as well. So the dirty, unwashed children are turned invisible and they become the "hidden people", who live in the rocks and hills. 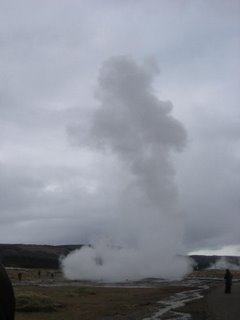 They geysir Strokkur, which is the most active of the current geysirs. It erupts about every four minutes. The biggest of the geysirs is called...da-daa...Geysir! It's on its way to becoming dormant so these days it goes off only about once or twice a day. Didn't get to see that. The geysir-area is very impressive even if it does slightly smell of rotten eggs there. 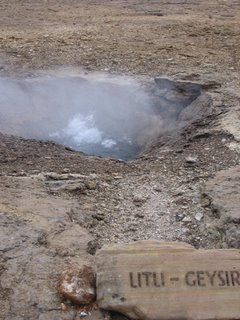 The big Geysir didn't look very impressive as nothing was happening, so I'll just give you little Geysir. It was boiling away quite happily. 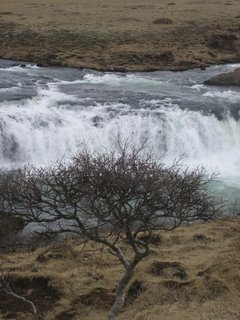 And last, but not least another falls, which name I never came to know. But I liked the look of them, which is why you'll get to see them.
Lähettänyt Mie klo 22:36