Well, I didn't go traveling today, because I got delayed by a demonstration. As I headed to the U-Bahn this morning around 10 o'clock, the main road had been cut off and there were dozens of policemen behind barricades, a helicopter circling around.

I was able to get to the station, but there an announcement told me that the U-Bahn wouldn't be working today at all. Closed because of a demonstration. Google just told me that originally the demonstration had been called by the right-wing party NDP, which wanted to protest against establishing a new, third mosque in Frankfurt. The left party had answered by calling a counter-demonstration to show their disapproval of all right-wing and Nazi ideologies. 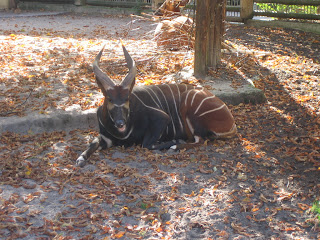 By the amount of the police it looked like they were preparing for some huge confrontation, but apparently no more than some 1000 people took part in the end - about 100 from the right wing side and 900 from the left.

At the U-Bahn station there was just a notice from the left wing announcing that they were doing a march against Nazism, so I didn't know anything about the background this morning. I just wondered about the huge amount of police and thought that this was again a perfect example of the national trauma that the Nazi Era still is here in Germany. You can hardly open a newspaper without some article about WWII or Nazism.

Mostly though my worries were much more mundane and I just wondered how I would get to town. I tried walking to the next open U-Bahn Station, but the road had been blocked. I returned to the U-Bahn and when I finally found the nearest S-Bahn Station, which was working, nearly an hour had passed. I had missed the train I had planned to take to Worms and the next one would have gone an hour later. The trains back from Worms run only at two hour intervals after five, so I decided to leave the trip to tomorrow. No fun to get acquainted with a new town, if you feel like you are in a constant hurry. 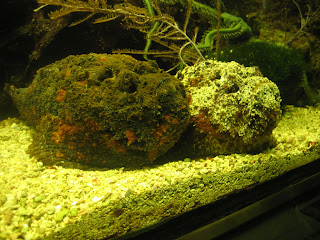 Instead I decided to go to the zoo. Now these days zoos of course are places that many people boycott, since they feel that zoos are an unfair institution and shutting animals into them is cruel. When you see a tiger pacing back and forth behind glass walls or some big eyed thing stretching its paw toward you from behind the bars, it is fairly easy to see how one could think like that. But it is also amazing to see these animals you would otherwise never get to see: the highly poisonous stone fishes (above), aardvarks, all the gorgeous night creatures from South America and Far East, fishes with no eyes, sea horses... 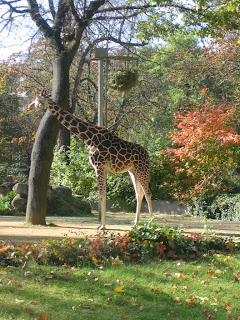 Or the animals that live outside. The big rhinos, lions warming themselves in the sunshine, shy giraffes, okapis and the coquettish flamingos. Not that I've ever really liked flamingos, since that pink colour looks like they forgot to draw their skin - or rather feathers - back on. Yeah, zoos may not be PC (that's still politically correct), but I did enjoy it. The beauty of some of those animals and their exotic strangeness is simply such, that you walk in these houses with your mouth open and heart fluttering. It's like being a child again.