What have we learned today? That a) one chocolate bar is not enough to keep you up and going for nine hours, that b) the time for mittens has arrived, that c) walking around is much more fun if it is warm and sunny instead of cold and rainy and that consequently d) sitting outside enjoying the said sun and warmth becomes impossible and e) one has to come up with new, pre-planned things to do on these outings, since the sun is gone. 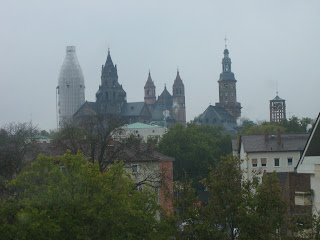 Yeah, I went to Worms today, but it wasn't quite as great as I had hoped. Mostly because of the weather. I think I have sat somewhere for an hour or two on every single one of these trips so far - reading or writing - and loved every moment of it. Not possible today and that was a serious downfall.

Marburg was also a very hard act to follow. That place was utterly gorgeous and I'm clearly not as easily pleased anymore as I was six weeks ago. I notice for instance that I'm plainly leaning towards medieval towns now. Worms didn't really have that - although it did have some lovely twisting streets with old houses that were still lived in. I discovered them as I was already heading towards the railway station and if it had been warmer, I would have stayed for another hour to wander along them.

Mostly I spent my time in the Nibelungen museum - Nibelungenlied being probably the most famous of medieval German epic poems, as most people are likely to know. What I didn't know was that a great part of the Nibelungenlied takes place in Worms, which is why the museum was there. 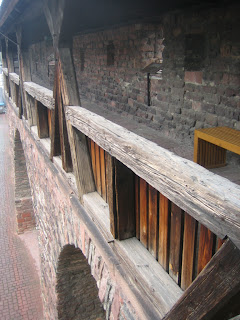 The museum itself was slightly disappointing. It was almost solely based on an audio-guide tour and some images from the story. The audio story was told by the imaginary author of the Nibelungenlied in a "dramatised" way. Dramatised can be good, but here it didn't really work. The bigger problem were probably my own expectations. The Nibelungenlied - as told to me again by Wikipedia - was recorded in writing around the 12th and 13th centuries, but like the Norse and Icelandic Sagas describes earlier times - here mostly the 5th and 6th centuries. What I was expecting to hear was the history of those times, maybe something about the background of writing the epic poem, about the problems of the Christian authors dealing with the pagan stories.

There were some of that, but the main interest was in the 20th century: the imaginary author literally gasping in horror at how his poem could be put into such horrendous uses. The idea behind it was basically good. You can't pass Wagner and national socialism and the 19th and 20th century uses of Nibelung as a source of symbols for the übermensch-ideology. It is also understandable, because it became clear that some people are afraid to even read Nibelungenlied these days; because they can't get pass the fact that those symbols and images were taken from it. That sounded like a very German way of thinking again: it is just the same as someone would refuse to read Kalevala, Iliad or the Icelandic sagas because they are national epics. 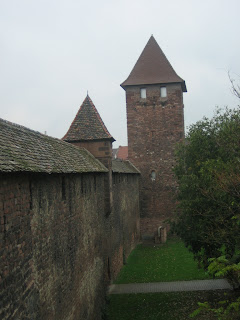 But fine, it was good and understandable, even if the tone of voice was a little preaching. However, when the dear imaginary author starts to claim that "his intent" was to write a very, very nice and completely peaceful story from the very first, not in any way glorifying revenge or bloodshed... Well, then bloody bollocks! This is the 5th and 6th centuries "he" was describing, the bloody feuding honour cultures, which would have dug his eyes out if he was suggesting that they weren't interested in honour and revenge and blood shedding.

You can and should have a 21st century - post WWII point of view - but that doesn't mean that you can go ignoring the fact that 1000 or 1500 years ago the world view was just slightly different. The bloody hero of one of those bloody sagas dug the eyes of his host out, because the hospitality wasn't good enough. He was considered to have acted just as he was supposed to - saying that doesn't mean that anyone today should act accordingly. Saying that the bloody Nibelungs glorified loyalty and revenge, power and strength doesn't make them responsible for the horrors of the second world war.

Yeah, can you tell that the place annoyed me. It was clearly underestimating the listeners' capability to think for themselves. And not giving enough factual information to make those judgments to anyone who hadn't heard of the honour cultures before. Annoying. It did make me decide to read the Nibelungenlied though, and the rest of the sagas, and the French, Celtic and British ones. I have read some of them already - as well as Iliad and some of the other Greek and Roman legends. That wonderful Greco-Roman class in the States, you remember. If I will continue this research thingy, then that type of sources will have more than a wee bit to do with my next project.