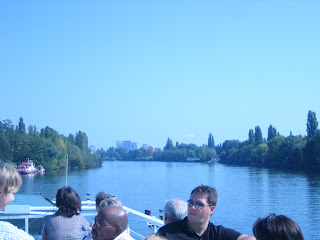 I practiced my German this morning and for a moment I thought of staying home to clean and write e-mails. Luckily I didn't, because I ended up having a very nice day. It was again incredibly warm - a total summer feeling. I was planning to go to a famous art museum called Städel and walking there along the river, since it was so beautiful.


When I got to the river though, there were a bunch of people lining up for a cruise. So on a spur of a moment I decided to join them. 100 minutes up and down the Main with the sun shining like summer was never going to end. It was nice. 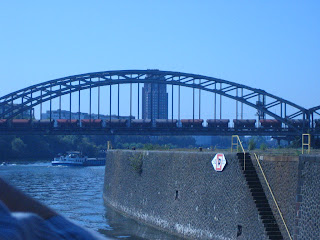 Afterwards I decided to leave the museum for another day and saw some more of Frankfurt. Mostly roman remains - again - and churches - again. There is a lot to see in Frankfurt too.

Then I went to have a piece of apple cake in a nice Italian cafe along one of the main touristy "boulevards": sun shone, street performers kept us entertained and I dug up my notebook to do some more writing.

When I had sat there long enough for the waiters to start hoping that I would move along, I went to sit by the main square and continued the writing. I wrote and watched the tourists and a guy selling pretzels from an old-fashioned cart. It was again all very, very good.

Now I am sitting here and listening to a great new band called Gevolt. They are from Israel, they play something they choose to call Yiddish Metal and some of their songs sound a lot like Rammstein. This here is a band that might make it even to my top three of favourite bands.
Lähettänyt Mie klo 20:42