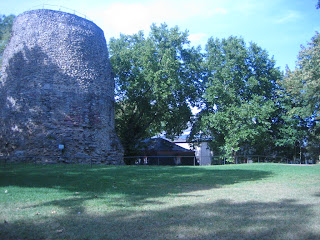 Today I've been to Mainz.

Mainz is a beautiful city, nearly two thousand years old with remains still left from the Roman times. It's not very far from Frankfurt - it took only an hour and twenty minutes from my doorstep to make it to the main railway station in Mainz. All at the incredibly cheap price of 8,40 euros - there and back. Now that I call good service. 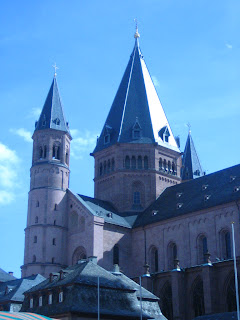 Mainz used to be a very important archbishopric from the Middle Ages on and there are still a number of impressive looking churches all around - intact, in ruins or renovated after the Second World War. There's the cathedral, which I managed to visit opportunely right at the time when a male choir was singing there. It sounded very good; the sound of their voices lingered in the air for seconds even after they had finished. 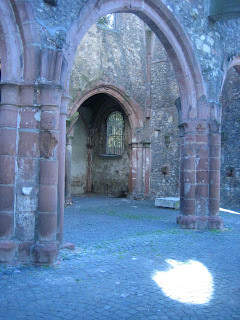 Then there was another church in ruins, where Johannes Gutenberg was said to have been baptised. It was really rather beautiful and very close to the river. I saw it right after I came from this Römisch-Germanisches Zentralmuseum, which happened to get on my way and was free. I've seen lots of beautiful objects today, I can tell you. Things that people have made during three thousand years or so - from four thousand years and more back to the early middle ages. Someone has made all those things, used them, wanted beautiful and totally impractical things around even thousands of years ago. 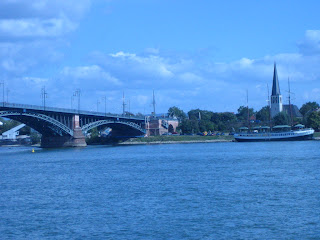 Yep. And then there of course was the river. Mainz is where Main - which goes through Frankfurt - meets Rein. The S-Bahn follows Main at the intersection of the rivers, so you can see it clearly. Very beautiful sight. And you can see so well how much bigger Rein is than Main. I didn't do any river cruises, but maybe one of these days yet. 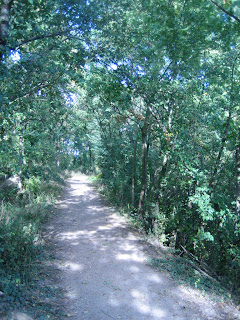 Jep, but it was much, much fun. The day was - and is - beautiful: the sun shines, it's probably the warmest day in these two weeks and really feels like summer. And me do loves summer. I definitely had a vacationy feeling this time. I walked around the old town, which is much more impressive than in Frankfurt. I had lunch in a nice place near the cathedral and I sat a little while writing at the old Roman fortress. It was up on the hill, where it was peaceful, quiet and gorgeous.

I am so going to continue this travelling thingy.
Lähettänyt Mie klo 19:12